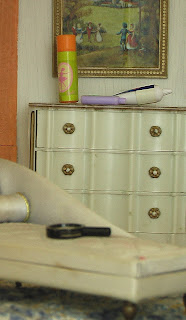 1
Maybelline wants a baby. She wants Harold’s baby. Lord knows she’s taken a shot at it every night for months to no avail. It’s just that she has no uterus. She’s not mentioned this to Harold. Maybelline believes there must be options for someone desperately longing for a baby.

2
Maybelline’s new friend, Amy, who she met when shopping for pillows at the thrift shop across town, is having a baby. May discovers the white pee-stick with its two pink lines in the waste bin. “I am happy for you. It’s just that my period started,” May says, and excuses herself rushing home.

3
When Maybelline hands Harold the stick, she is no longer afraid that he will leave her. He looks in the little window,
“Two pink lines, May. What’s it mean?” She pats her pooch-belly tilting her pretty head. Later, Harold makes gentle love to Maybelline even kissing her down there.

4
Harold leaves for a trip `cross country to escort a wide load delivery to Oregon. May meets Amy for tea. “Willikers,” Amy says, “I thought you were bleeding? If that ain’t some kinda miracle!” “Spotting can happen when the egg attaches,” May insists. She doesn’t much like this Amy after all.

5
As it happens, May’s 20-year-old son Jimmy shows up on the day of her baby shower.  She gives him a smack, secreting him out the back door.
“How’d you find me?  You will not ruin this, James David.” He snorts and flips his smoke at her, “What’s with the pillow? You running a con on Dirty Harry?”

6
“We don’t see that little blond gal, anymore?” Harold mulls.
"It’s so sad, Harold. She missed and will have no part of me since.”
May arches her back. Her big belly sticks
out.
“Why’d that delivery boy call you mamma, May?”
“Honestly, wasn’t that the rudest thing ever, honey?”

7
May’s feet are all swelled up. She knows it’s crazy, her breasts grow tenderer by the day and she pees every 15 minutes.  She gazes at herself in the mirror rubbing her pillow-belly. Maybelline brings her face to the glass.
Harold’s right. She is glowing. Motherhood becomes her.

8
“After you take the Corvette and make the delivery, you need to vanish, Jimmy. That’s it. I’m through playing Mommy to you!” May hangs up rubbing her fingers through
her rumpled hair.

She’s dying for a cigarette but it’s not
good for the baby.
“This will be over soon enough,” she sighs.

9
“This picture of the dead Amy resembles your friend, don’t she?”
“Nah, I just saw her yesterday,” May bounces baby Harold; his insistent cries hurt her head.

Harold doesn’t hear May’s chatter. Since his car was stolen he only listens to the news.  May hugs her little baby real hard.

Email ThisBlogThis!Share to TwitterShare to FacebookShare to Pinterest
Labels: Maybelline

After: Three Young Surrealist Women Holding in Their Arms the Skins of an Orchestra. 1936. Salvador Dali.
Music droops to a stop under the barren sky--a startling struggle on this narrow ledge. Oh grief, old glove, I throw you into the garden, escaping now. I place my ears upon this altar of rock. My nakedness thinly covered; head budding petals. These veils of flesh, this hedgerow, this rock cleft speak in aromas sickening and sweet. You lay in places surreal as a fractured bed. A white-noise the static cry; burning loss raises its flaming sun and symphonies pour from lungs.
at September 09, 2010 No comments: