The Death of Emily 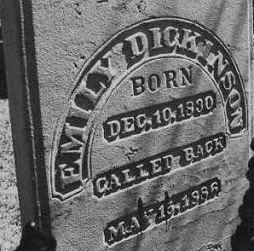 ’s Missing Cemetery Gate Found
Boston (Reuters) – An ornate wrought-iron gate that guarded the New England cemetery plot of the 19th Century American poet Emily Dickinson has been found at an antique shop after being missing for two decades, a descendant said on Wednesday.

The Death of Emily

A fly buzzes when I die. It’s the sound the life support system makes as I flat line. I slip out of my body and hang around the drop ceiling. I can see the top of everyone’s head. I didn’t know my doctor was balding. He has an interesting strawberry-mark – a little map of with ten hairs growing in it. I wonder if he knows about it.
No one notices me. They are just realizing I’ve gone missing. People run around the room, code blue. I feel young again. I want to let them know they can stop worrying. I am still here—right as rain. And I can fly.
“I’m okay. I made it,” I say. No one hears me.
The stillness in the room is like the stillness in the air between the heaves of storm. And then people go nuts. They use those paddle things. The doc yells out amounts of medication — and “clear” – before he jolts me. They stare at the monitor. I want to sit up and sing, “I Love a Parade.” My ticker is no good. We know that. That’s why I’m scheduled for a triple bypass. It’s five a.m.
Heart failure is a misery. This event is no exception, bad enough to drive me out. Maybe that’s the secret to immortality – hang tough through unspeakable torture. And? I think as I float above the din. I move to the side of the room where there’s a window to the hallway. A man from housekeeping is cleaning the glass when I code.  I wonder if the smell of ammonia tipped the scales.
My daughter will be devastated when they tell her I’m dead. People think it’s the next crisis. It isn’t half bad being dead. I feel I have someplace to go, better than I have in years. I imagine my daughter’s face and find myself looking into it. In the waiting room, she anticipates news of me. She reads a magazine.  Mary is thirty-seven. Even so, her face looks like a dumpling to me. I want to blow raspberries into her cheeks. Her cuticles are chomped. Her fingertips are stubby and wounded-looking. She absently flips through pages. Is she praying? I hear something but her lips never move. Someone will be killing me off for her in a few minutes. I’m okay; I want to let her know.
“I’m alright. I’m still here,” I whisper.
Thoughts of my body cause me to drift back to my room. I watch the goings on. My chest is cracked open and the Doc’s latex-ed hands are bloodied. He looks defeated. I like to think it’s about me. But I think it has more to do with failure. His hands are poised for a stranglehold. One foot is forward. He’s ready to seize at something that isn’t there anymore.
The room’s been transformed into an operating room. Others, nurses, people who came running when the alarms went off, stand waiting for the clock to run out.  Eyes are somber – but no one cries.  Experience has wrung them dry, I guess. An orderly appears and disappears in the doorway with a food tray. The window washer progresses down the hallway. I follow. His pores are enlarged, some have stubble pushing through. His dark eyes scan the glass. I think he is worried about me. He and I turn to look when anyone walks by.
The nurse looks dismayed. After weeks together in the town of , we are friends. She lunched with Mary in the cafeteria once. I can see now that the top of her hair is violently teased and lacquered; there are particles of dust on it. She backs away from the bedside. The doctor speaks. Breaths gather firm.
“Emily,” he says, stepping near to my bedside.
I’m drawn on a downward draft as he rubs the wrist. He and I were not prepared for this last onset, the end of one reality. A brilliant light collects in this lost room. “Wow!” I want to say. “This is fantastic!”
Mary’s shoulders have quiet flakes of dander on them. She waits outside the closed door to my hospital room. The doctor removes his spattered gloves and jacket. Coming from the room he extends himself to Mary. On his hand is another strawberry mark, one with veins popping through. Getting old Doc, I think.
This light overwhelms! “Look,” I say. But no one hears. The doctor is pensive. Mary’s face dissolves, “It's okay,” I say.
The stretched lips are an ugly mask; there is a blemish on the chin. Two work on the body. Fat and skin re-cover haphazard ribs before the sheet is pulled for cover. I can’t believe it’s me. I can’t believe I’m dead.
A cardboard box next to the bed holds reams of heart monitor paper. I imagine someone closing it for storage in a basement vault, the marks of a human heart. Keepsakes will be signed away. My phone directory sits on the wheeled-away nightstand. I’ll trade that old life for this new one.
And then there is a fly’s drone, a blue-uncertain-stumbling-buzz. It comes between the light and me. I hesitate. The windows fail.  I can no longer see to see.
﻿
at February 05, 2011 No comments: