Injuring Eternity by Millicent Borges Accardi, $14.95, Mischievous Muse Press 2010
A Portuguese-American poet, Millicent Accardi’s second collection of poetry is Injuring Eternity. Ms. Accardi is a National Endowment for the Arts and California Arts Council Fellow, among others. Her poems have appeared in Nimrod, The Tampa Review, New Letters and Wallace Stevens Journal. In addition, she has been anthologized in Boomer Girls (Iowa Press), and Chopin with Cherries (Moonrise Press). Ms. Accardi’s residencies include: Yaddo, Jentel, Vermont Studio, Fundación Valparaíso in Mojacar and Milkwood in Cesky Krumlov. Forthcoming in spring 2012 is a third collection of poetry: Only More So (Salmon Press, Ireland).
The title of this collection of narrative and persona poems, Injuring Eternity, sets up a tension for the reader and Accardi does not disappoint.  Injuring Eternity sets about the work of killing time by arranging itself in the shape of a day, with the named sections: Morning, Noon, and Evening.
Just for the sake of mood consider each of these lines:
Her dealer around
the corner waiting in striped pants (67)
Black widow spiders
Abound in the wet darkness (77)
A few moments before her heart crushed
Her upon the ground from a fall(26)
. . .Her
Black pants and uncrossed legs
Against his white fingers were all
She could see of the piano keys (1).
A shadow lurks throughout the book; and the reader remains expectant never knowing when a dark chord may sound. Against this tension, there are poems which speak to the death of Brittany Murphy, school shootings, a make-up counter,  Karl Marx (appears in two poems), Billy Holiday, Miles Davis (also repeats), the Gulf oil spill, passion, a carpenter spitting nails and others.
The variety of poems in this book is unified by the voice of the work which is bicultural, bilingual and female.  There is a way in which Accardi flips language on its head that brings to mind turns of speech which a student of the English language might use; this gives lines or words a lilt in certain poems, a fresh approach to language.  Time, in context, ticks away in flashes and instances; from the child reminiscing about the father or the wife struggling for existence, as in the poem, “Birth:”
In the living room, you my dear husband, my
you sleep: on the worn out sofa, like a child,
or a man who has given up. If my four legg’ed
shadow can crawl past you all will be well.
The Bible and the headstones will rest
with me, buried deep in trampled grass:
it is where they belong. You never gave me
any trouble, dear husband, but you never gave me
any encouragement, either (13).
There is a duality throughout this volume. A duality of tradition against change, of culture against culture, and of man against woman; the gender clash is illustrated specifically here in the final stanza of Accardi’s startling poem, “Argument,”
Like frozen water. We wish, for a moment,
we liked resistance. We wished we needed a cause
to believe in. In this city we keep trying. We hear
The word of hymns on fire.
In this city, we are the Ugly Americans.
As if I were a mad women,(sic) or someone to give
A wide berth to, you slap my face, an action
You would never take back home in the states (85).
In these often dark and mysterious poems the reader, taken into a childhood memory,  is locked with the poet in a brutal and inescapable place, as in the poem, “Music Remembered from the Womb,” which begins; “Their music was played/ long before father’s coarse/ face abraded my shoulder, ( 32)” revealing a father’s incestuous treachery. This poem leaves the reader in that place of devastation, with no hope for mercy or redemption, “And I see what he/tells me is true./The unmade wonder/of closed eyes, and the awful, awful/luck(33).”

From this darkness we turn the page to become immersed in a childhood memory in “Blessing in Disguise,”
Ms. Accardi was kind enough to answer a few questions about her book…
BluemoonNortheast: Do you have a favorite poet or style of poetry?
MC: I am partial to subtle poems that do not tell the whole story, that paint a distant abstract portrait of a snippet of time. Like the work of Lynda Hull. I like the mystery in poems and am fascinated by subtext and what is left unsaid, the underlying truth belied inside the words on the page. Very much, I like the work of Antonio Machado, Fernando Pessoa, Carl Dennis, Neruda.
BluemoonNortheast: Janet Holmes says that your poem’s “speakers navigate-between casual lies and the unknowns youth is especially privy to, building, poem by poem, a body of hard-won truths.” What can you tell us about the voices you conjure in this collection and do you have a way you connect to these personas?
MA: It sounds really stupid or ignorant or un-educated but I find myself mostly listening a lot, like Yeats’ automatic writing. Many of the poems I do not feel were written and sweated over by me but delivered through me, as a medium does. If I sit quietly and pay attention, I can get a good first draft, then my job in the next drafts is peeling away whatever does not belong to get the poem on the page to match the poem in my head. So often my subjects and personas are not things I pick or even like but subjects that are given to me. It’s like what used to be called a party line, in my parents’ and grandparents’ time—a shared telephone where someone could pick up the line at any time of the day and hear people talking. Now, that sounds insane too. But I try to listen to the phrases I am given, whether it is through a thought or a dream or a phrase or some sort of starting point.
BluemoonNortheast: Can you talk a bit about the title as relates to time and the three sections of the book, Morning, Noon and Evening?
MA: Every moment in life is precious and the Thoreau quote means to me that each should be savored and lived and not wasted and I hope through whatever issues my narrators are going through in these poems that they are descending upon the time and not pushing it away. As the book came to be a book, it seemed to me that poems needed to be classified either by subject matter or by voice, that some pieces were morning poems while others were evening. At some point it seemed natural to split them up into sections of time, instead of all together. Shifts in tone or subject matter abiding, they seemed to fit easily into these categories.
Do you have a favorite poem in this collection? If so why is this poem your favorite and my we reprint it here?
Oh my. I enjoy reading aloud “Serving” at readings. It seems to have its own dramatic twists and pulls and it is a good poem for those who have ever worked in the service industry to identify with. I also like “Birth” because it was my first, what I felt was successful poem. And “Living Only with the Hands” and “Mourning Doves are also, I think successful. If I had to pick one poem to represent the collection I think I would select “Mourning Doves” because it encapsulates time and the importance of savoring each event as well as an interaction between people and the natural world.
Millicent Borges Accardi's website:
From Injuring Eternity:
Mourning Doves
Have such soulful
Eyes, their gray suit
Of feathers blurs and sinks
Them into the background
Like a creature in hiding.
They hover below the wild
Bird feeder set up for the finches
And harvest the shells, the thistle
Seed casings and what drops after
The finches and faux robins and phoebes
Have feasted. The mourning
Doves huddle and nest in the mountains
Of seed shells and dirt and make circles
With their small bird bodies turning
Into the ground digging a place around
Them as if they were under a shrub with only
The black drops of ink from their tail feathers
Visible. In a group, they lie in wait, their dear gray
Eyes gloomy and sullen and innocent and they want
What the world desires, to be fed and comfortable
And consummated and happy.
at June 25, 2011 2 comments:

The Birth of Little Bull (a villanelle)

(When he was born the moon was beyond full)
And truth be told to thrive is to consume.
He crowned the water spilled, a son, our Little Bull!

We tried to speak but none of us was able
when his bright cries arose to fill the room.
(When he was born the moon was beyond full)

A son, on Easter Sunday, the stuff of fable.
His face turned up toward God and spring in bloom.
He’s crowned, as waters spill, a prince, our Little Bull.

He’s born the world is new and life is beautiful.
His bones and blood and heart knit in the womb
(When he was born the moon was way past full)

Rare blessings seem to spill as from a pool,
and darkness is now jailed within a tomb.
(When he was born the moon was beyond full)
He’s crowned as waters spilled, a prince, our Little Bull. 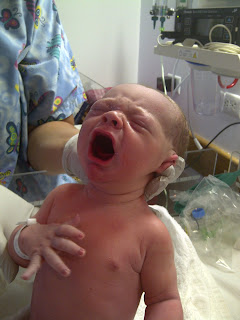