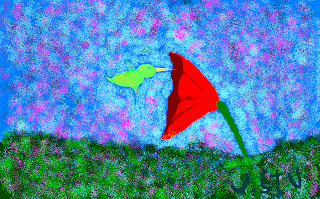 This bit is the product of a creative exercise intended to help the writer to think differently while creating. We did an hour long free write wherein our facilitator called each of our names every few to several minutes and the called person would call out a word which we had to incorporate into our writing. This is my result. I cannot recall all of the words that were called out except for more obvious ones like hotdog and root beer. We were also given a prompt which I do not recall.

Once upon a time, a ruby-throated hummingbird was building her nest on the branch of a silver birch tree. She gathered feathers and cobwebs and bits of algae to soften the bed for her babies. She whirled about in a hummingbird-hurry working to finish this project.
Spiders tumbled and Ruby’s personality was such that she fretted and worried over her nest making. Eggs were imminent and she hadn’t even eaten half her weight yet today. Her fuchsia breast pulsed with every beat of her heart. And her mate who was nowhere to be found—was of no assistance in these matters—and now thunder rolled overhead. She flitted to the Rose of Sharon for some lunch and noticed a wee fairy reclined on a nearby toadstool.
“What Ho!” said Ruby, but the fairy, looking rather glum—her affect as flat as a pancake—said nothing. In fact, she acted as if she’d not heard Ruby—
“Say! You! Fairy!” Ruby called again, “I’m in need of some fairy assistance!” Still, the fairy was still. Until—along came a tree toad—he tiptoed carefully up trying to startle and perhaps capture the fairy with his hotdog ways. So Ruby lit down and slid her narrow beak under the fairy’s wings—lifting her and carrying her off to her newly made nest. Still, the fairy was still.
“Perhaps I’ll have to take you to the witch for a diagnosis,” Ruby mused, “the witch has all the knowledge there is about fairies and she’ll surely know how to cure you!”
“Eh” said the fairy.
“What’s that?? Come again?” said Ruby.
“Eh” said the fairy.
“Listen here, Ms. Fairy, I haven’t even eaten half of my weight yet today and, as you can see from this lovely nest…eggs are imminent! Now snap out of it! I need you to conjure me some fairy—blossoms.”
“Eh” said the fairy. And she glumly raised her glum arm and voila, buds of lavender appeared all along the birch branch.
“Thank you, thank you!” said Ruby, “you passed that test!”
Ruby became so excited she flitted from blossom to blossom to sip the nectar she found there. But she did not notice the swarm of bumbles approaching. Nor did she see the lizard whiling his way up the trunk of the silver birch his long tongue licking out into the air as he neared the doldrums fairy.
“Hey,” he said, “Que Pasa Fairy?” Upon which Ruby plunged at him and pecked with her pointy beak.
“She’s my fairy!” Ruby insisted, “We've got the same ancestors and I’ll thank you to take your scaly self out of here!”
“Chill out sister! That’s the dullest fairy I’ve ever seen! You think she could conjure me up some flies?”
“You will not sabotage my nest,” said Ruby pecking at him three times until he turned tail and headed slowly back down the birch tree trunk. Now the fairy slept soundly in Ruby’s nest—or was she dead? The quick-witted bird wondered and so she landed on the little fairy’s knees and trembled until the fairy was shaken awake. Fairy looked about in a daze.
“Where’d that butterfly go?” she said.
“I’m not a butterfly,” said Ruby. “I’m a hummingbird and have imminent eggs and you must fly out of my nest now!”
“Have you got any root beer?” said the fairy.
“What is root beer, dear?” said Ruby. She flitted again from flower to flower, nipping an intermittent gnat from the air in a frenzied manner. Suddenly the fairy perked up and groomed her comely wings until they were looking quite dapper. And she flew away.
at February 07, 2012 5 comments: